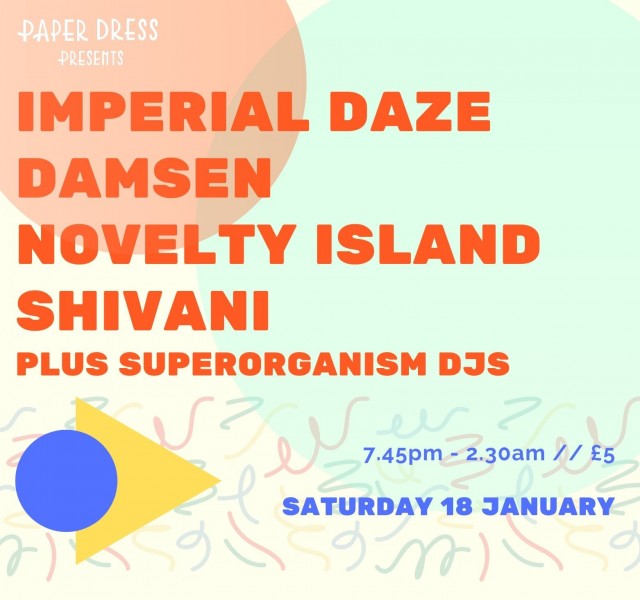 Join us on Saturday 18 January for a night of shimmering psych pop & electronic synth pop of all shades with this super lineup including a headline slot from Imperial Daze plus damsen, Novelty Island & SHIVANI.

After the live music we’ll have special guest DJs Superorganism bringing the party till 3am!

Imperial Daze are a psych-pop band from South London hailing the likes of Damon Albarn, Kevin Parker and Soulwax as heroes and guides.

Having shared stages with: The Maccabees, Mystery Jets, Nilufer Yanya, All We Are and Matt Maltese, Imperial Daze spent 2018 building their own Tower Bridge studio in a disused commercial freezer: Electric Eel Studio.

The latest EP, ‘Surfaces Sensible’, released through Tip Top Recordings on the 7th June 2019 has already caught the attention of John Kennedy, being playlisted on Radio X and multiple plays and interviews with Amy Lame, Guy Garvey and Radcliffe and Maconie over at BBC6 Music.

Take a listen to their new single here: //spoti.fi/2DSTV2Q

Novelty Island is Tom McConnell. He is from the north.
“Magdapio Falls” is the first Novelty Island single. It’s from his brain.
He travelled to that perilous London-place to study at Abbey Road Institute. He recorded the debut EP (due Feb 2020) in the Institute’s studio, next to the old tapes in the vaults of Abbey Road.

Novelty Island can be seen live with a cast of characters like Tom’s other half, Frankie Tibbles, Tom: boy-wonder on bass, Frankie: wizard.

Plus Superorganism DJs till 3am!

B and Soul (of trippy electronic pop collective Superorganism) return with their eclectic party tastes for their first set of 2020!

Prepare yourself. Hear everything from ABBA to Todd Terje, Daft Punk, Earth, Wind and Fire, Peggy Gou, The Supremes, Gorillaz, Fleetwood Mac, The Cars, DJ Koze, and Hot Chip. Wait, what? All of that and more. Just get ready to dance.