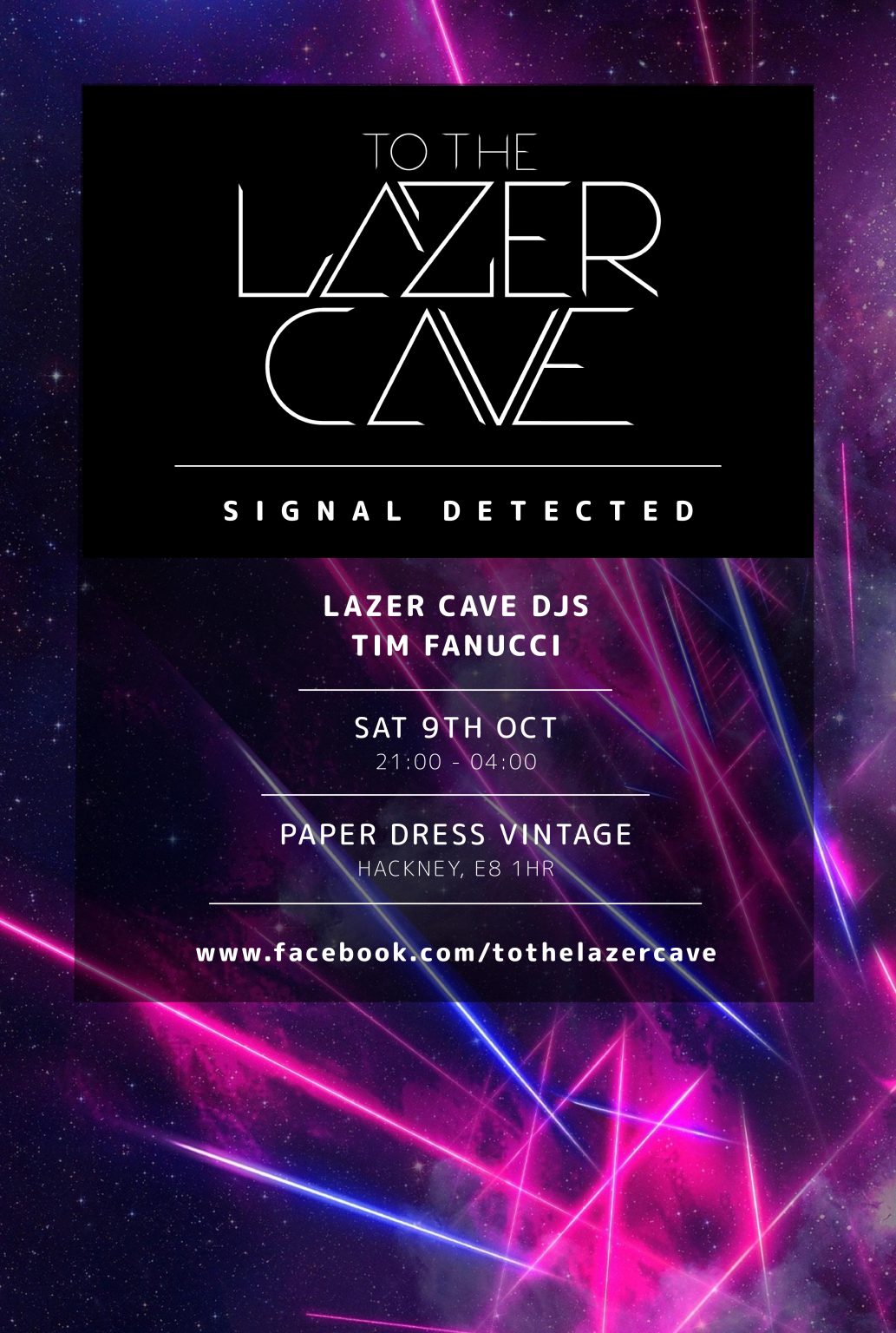 to the lazer cave… SIGNAL RECEIVED

5 years, 6 months and 0 days ago the Lazer Cave vanished without trace. There was no warning, no logical reason, no farewell goodbye.

For many it left a void in life as they carried out a futile search for cosmic meaning elsewhere. Why did it abandon us? Why did it leave us to fend alone in an Earthly realm of mediocrity? The true reason may never be known but without a goodbye some held the HOPE that one day, it would return again.

5 years on, to the last of the believers and cosmic dreamers we say thank you because we can now confirm… a faint signal…. has been RECEIVED.

On Saturday 9th of October the lazer cave will land in Hackney Central for an explosive, intimate tear up for just 120 lucky cosmic souls.

Tickets go on sale Friday 10 September at 10am.

to the lazer cave DJs are the musical collective and force behind the now infamous London based lazer cave warehouse parties. From the lazer cave’s humble beginnings five years ago in a dark and seedy basement in Dalston three veteran disco warriors set about resetting the London club scene, from that of apathy and greed to one built on the love of unforgettable parties and shared experiences. Their sole objective has been to create nights that go down in history and the collective memory of all those who join them on their journey. Sharing bills with Justin Robertson, Todd Terje, Optimo, Pete Herbert, Shadow Dancer and Faze Action to name just a few the lazer cave DJs have honed a high octane, genre fusing sound best described as driving, deep and cosmic. From playing disco by poolsides, 12” classics at after parties, closing sets at festivals to their native habitat of rammed East London warehouses the lazer cave DJs are on a mission to be the very definition of hedonist party.

Tim Fanucci has been building a reputation for himself on the festival circuit playing eclectic sets at Glastonbury, Bestival, Secret Garden Party, Boomtown Fair and Shambala to name a few. His passion for the disco has also taken him on international tours of Thailand, Australia, Malaysia & Singapore in recent years.

No stranger to DJing in Ibiza where he used to live, Tim held down prestigious summer residencies at Space, as well as Savannah Beach Club on the infamous sunset strip and regular sets at late night hotspot Es Vive from 2004-2012.

Tim recently left Ibiza to make London his home where you can catch him playing extended disco fuelled sets at warehouse parties across the city and regular appearances at Oslo.

Counting Larry Levan, Frankie Knuckles, Todd Terje & Greg Wilson as some of his DJ influences, you can expect to hear everything from soul-funk to space disco to vocal house within an anything goes party atmosphere style set.

█████ WHAT TO WEAR ████████

The lazer cave is an experiential party built from reflective materials and light. To add to the experience there’s a lot of love for what you wear – we’re talking glitter, sequins, cosmic prints and reflective fabrics.

For inspiration check out…

THIS EVENT USES HIGH LEVEL OF LIGHTING EFFECTS AND STROBE. IT IS NOT FOR THE FAINT HEARTED. IF YOU ARE SENSITIVE TO THESE CONDITIONS PLEASE DO NOT ATTEND THIS EVENT.