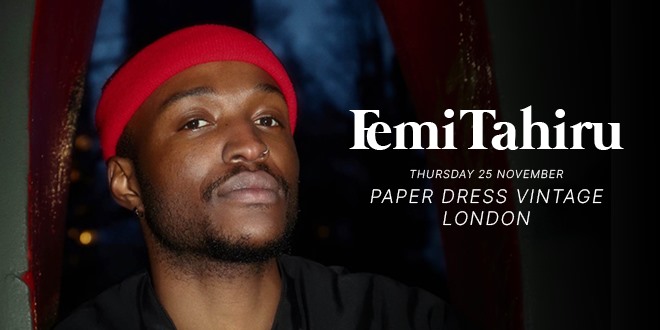 The debut headline show from Northampton born, Manchester based indie soul artist Femi Tahiru. This show will cover his past works as well as future music that’s due to announced.

A effortless, polished and emotive performer, Femi has been impressing R&B listeners since his 2020 debut offering What You Want – The EP features previously released singles; the bedroom pop inspired, wistful banger Signs, and the seamlessly silky serenade Asking For. The singles received acclaim from tastemakers such as BBC Radio 1’s Huw Stephens and BBC 6 Music’s Chris Hawkins.

The self produced EP, instrumentally drawing influence from artists such as The Internet and Mac Ayres, encompasses the lo-fi summer vibes. An assortment of guitar strummed 7th chords, subtle yet busy percussion and swooning vocal melodies combine to create soundscapes that are familiar and delicate.

Prior to lockdown Femi was building a reputation across iconic grassroots venues such as Gorilla and Band on the Wall. With the live music scene as we usually know it on a temporary pause, Femi is planning to get back on stage as soon as realistically possible, with further releases scheduled alongside some exciting collaborative plans.