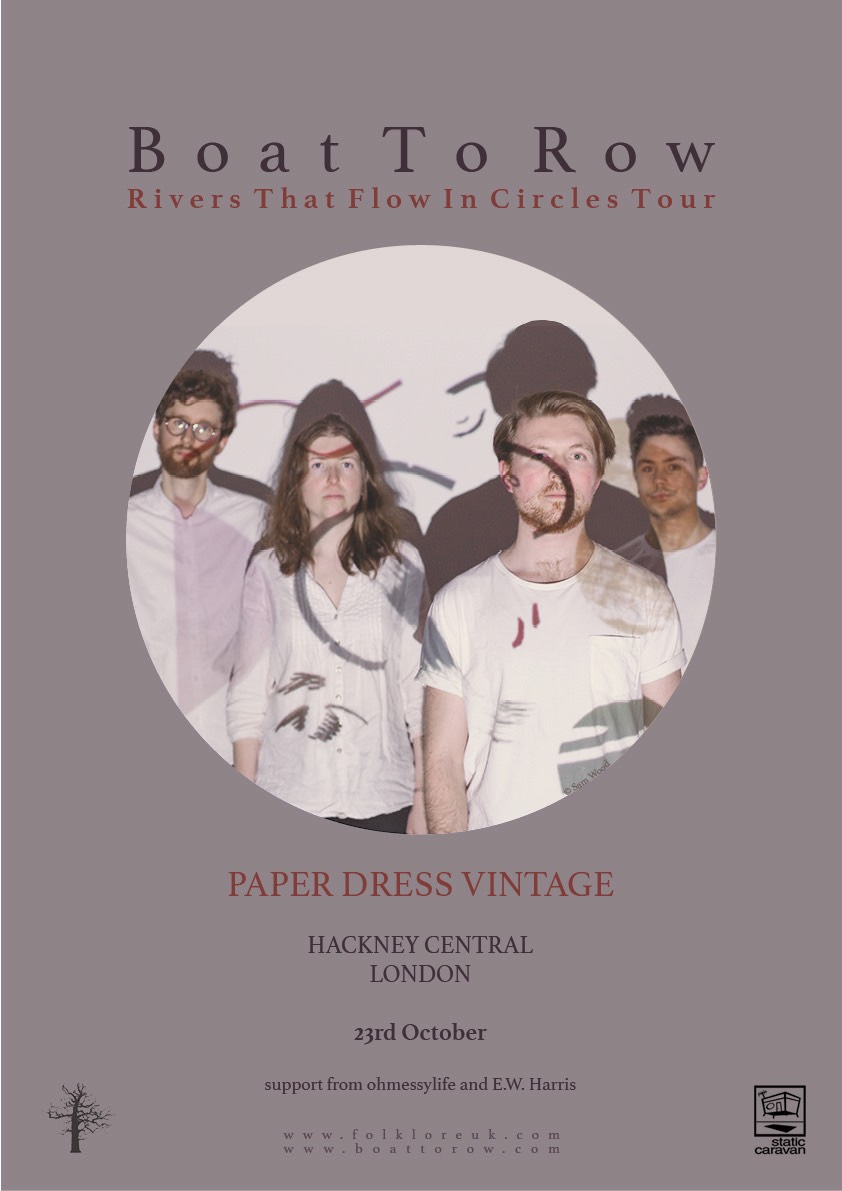 Boat to Row have previously been supported by BBC 6 Music and Radio 2 and many local stations, and received glowing reviews from websites as diverse as DIY, The 405, Counteract, Folk Radio UK and Gold Flake Paint. They have toured extensively appearing with acts including Slow Club, Johnny Flynn, Willy Mason, Ryley Walker, Kate Rusby, Sweet Baboo and graced stages at many of the country’s favourite festivals including Glastonbury, Cambridge Folk, Green Man, Truck, Wood, Moseley Folk, Y Not and No Direction Home.
​
Following the release of their debut album ‘I Found You Here’ in 2015, Boat to Row have found themselves overcoming many different obstacles record their second album. From line up changes and corrupted hard drives, to losing their practice space when the legendary Highbury Studios closed, the creative flow has not been easily followed.
​
Despite all of this, ‘Rivers That Flow in Circles’ is an album that sees the band pushing their horizons. Self-produced and recorded in a variety of rehearsal rooms, bedrooms and kitchens, the record showcases the bands most ambitious songs yet. Drawing on band members both past and present, as well as many other musicians from the Birmingham scene, this is an album which works from a diverse musical pallet.
​
The first single from the record, ‘Spanish Moss’ is a fantastic example of the band’s growth as African percussion meets wirey electric guitars over the top of a hypnotic bass line. Just as the song reaches a crescendo it dissolves into a spacious instrumental, where a soaring violin twists and turns over a sea of guitars and synthesisers. Freeing themselves from the constraints of hourly studio rates has been a gift which has allowed the band to turn in an album that is more adventurous and expansive than its predecessor.

“Masters of melodic yearning.”- For the Rabbits

Formed in London in 2015, Golden Spike´s Alt-folk Americana sound is made by two Australians, an Irishman and a Kentucky Colonel. Citing influences from Big Star and The Jayhawks to Mark Mulcahy, Nico and Jim Ford, Golden Spike have been praised for their highly melodic, concise and off-kilter approach to classic pop. Their four track debut, Whom Shall We Shoot was recoded at Soup Studios, with a follow-up about to drop. This summer they contributed a track to the WIAIWYA compilation The Moon and Back: One Small Step for Global Pop and their latest single ‘California Death Cult Girl’ is out now.

In the not so distant future the world looks very different than it does today. An asteroid has collided with the earth. Large stretches of what would now be called wasteland isolate technocratic city states. In one such city, Rocket City to be precise, a slum lord and a techno-hierophant labor in secret. Their goal, to create a new kind of life, and in so doing attempt to glimpse into the future. From this fantastical setting, born from the imagination of ambient folk artist E.W. Harris, comes Homunculus; a mixed media exploration not only of the possible future, but of personhood, prejudice, emotion, and ultimately of ourselves.