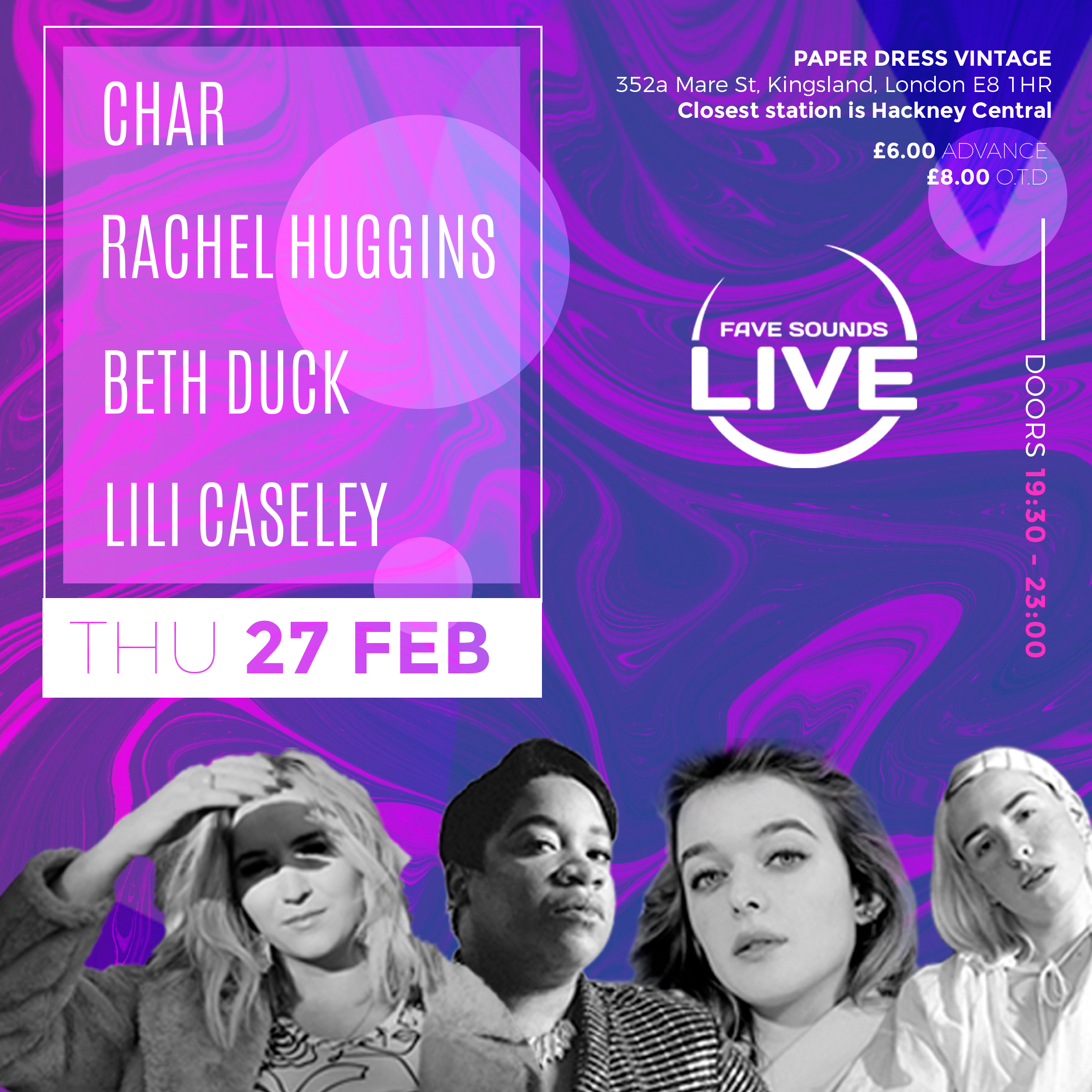 Fave Sounds Live is a platform providing the greatest mixture of emerging and established artists from the UK and beyond. Advance tickets just £6 here

CHAR is bringing her unique blend of R&B and contemporary pop. After being selected by Maisie Williams and the ‘Daisie’ team in 2018 to be one of the ‘Daisie100’ artists for the successful creative platform, she has since recorded her debut EP and gained traction in the London scene. Her music is a vibrant, self reflective journey through her personal experiences, showcasing her ability to write about moments of both strength and vulnerability.
Link to music – https://spoti.fi/39cJpRK

Hailing from Camden, North London, Lili Caseley is a singer and songwriter who creates soul pop about lovers and experiences, past and present. Her songs are influenced by her Portuguese and French heritage, legendary poets and the biggest pop talents of today. Yet to release her debut EP, she’s already won support from respected music titles like Clash, Notion, Music Week and Official Charts UK. Whilst also receiving coveted airplay as DJ Target’s UK unsigned single on 1xtra on Toddla T’s show, playlisted on BBC Radio 1xtra, played on Huw Stephens Radio 1 intro show, BBC Introducing’s featured artist, and Radio 6’s BBC Intro mixtape show. She was also shortlisted out of over 600 applicants, in a group of 5, to support Ed Sheeran on tour.

Beth Duck is a London based electronic pop artist best known for featuring on tracks, such as ‘Sick Of Love’ and ‘A Little More’, with L.A producers Lucian and Olmos.

With over a decade of experience as a performer, Rachel Huggins‘ new EP ‘KEEP DREAMING’ follows on from her previous EP ‘Home’ in 2016. As well as being an accomplished songwriter and performer of her own material, Rachel has also lent her voice as a singer to a variety of other artists and songs, becoming a two-time finalist in the BBC’s Gospel Choir of the Year, featuring as a backing vocalist for DJ Vadim and Sola Rosa and performing at Glastonbury, Green Man, Kendal Calling and Secret Garden Party, among others.