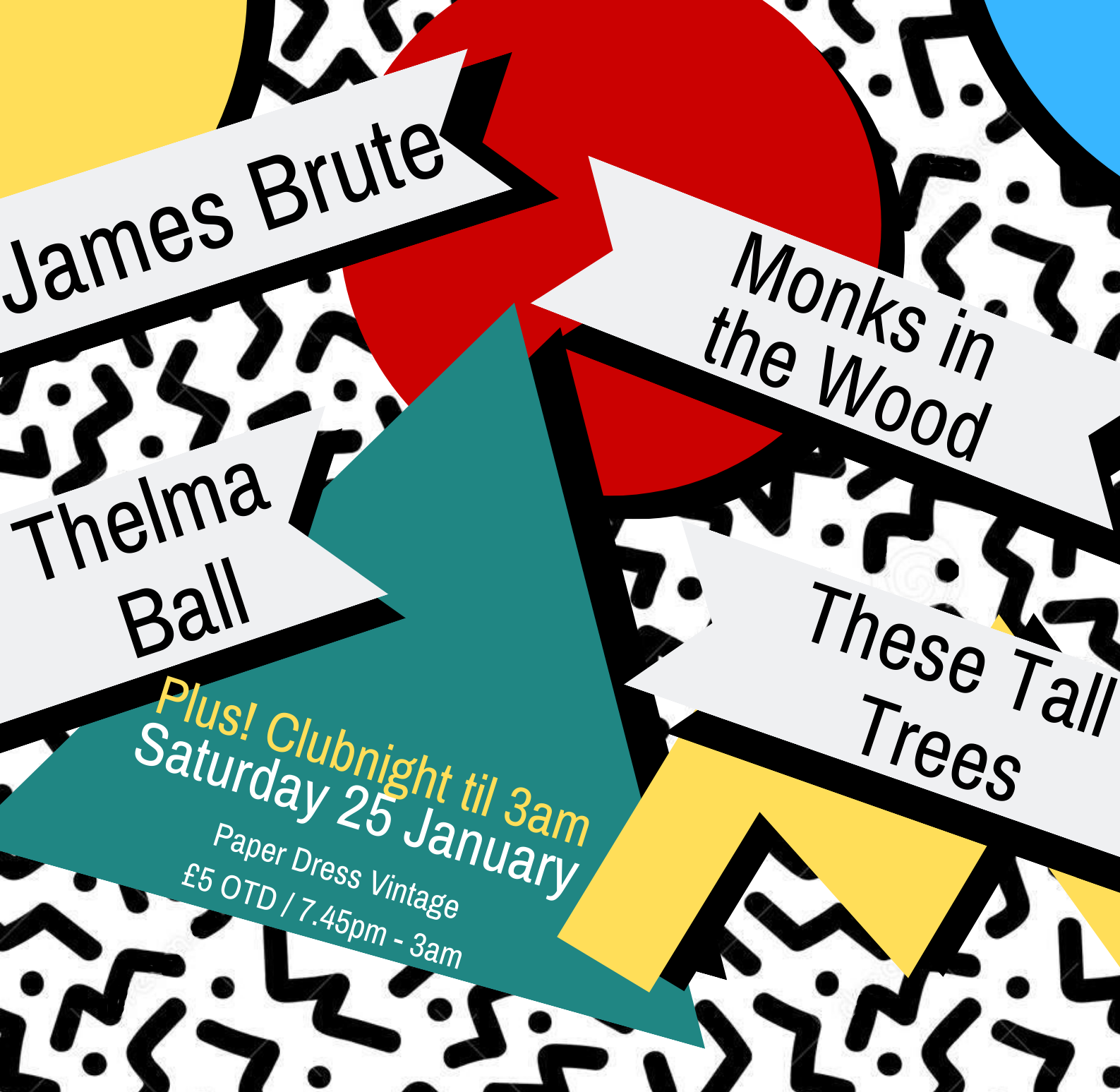 Join us on Saturday 25 January for an evening of quality live music as we welcome back James Brute for another headline set of acid blues, doom-wop and rock n’roll alongside MONKS IN THE WOOD, Thelma Ball and These Tall Trees!

After the live music we have a new night of Disco Boogie heaven with Freakin’ Time!

James Brute writes spooked out songs of love, loss and lust and delivers them in a heady mix of acid blues, doom-wop and rock n’roll.

The former front man of The Brute Chorus released the acappella single Bury Yourself in 2014 with long-term collaborator Mat Martin. The single got picked up by John Kennedy on XFM and garnered a range of press including the NME. Shows followed in support of Nadine Shah, Kingsley Chapman and the Murder, John J Presley, Furs and Big Girls alongside legendary basement parties in Homerton under the old Railroad Café.

MONKS IN THE WOOD
//www.facebook.com/MonksInTheWood/

Being compared to such a variety of different styles from Duran Duran, Deerhunter to ELO, The Monks truly have their own vibe which seems to resonate with listeners of different ages and music tastes.

“We like to imagine we are on another planet when writing songs. We are looking at the Earth and the way it is being treated and we reflect. We are inspired by science fiction, science fact and all the sorts of crazy things human beings believe, prioritise and do.”

Named after the band’s grandma, Thelma Ball maintain a relentless spotlight on the softly medicated culture in which we inhabit. The release of ‘I Could Be Happy’ and the more recent, ‘Shy & Unappealing’, perfectly showcase the band’s dulcet sound and modern day commentary.

Support for Alien Tango, Time for T and Latenight Honeymoon amongst others, is earning Thelma Ball a reputation of their own and armed with their upcoming release, ‘Overachiever’, paired with a BBC Introducing live session, 2020 is set to be an important year for the grandma-rock outfit.

“Their sound is very brooding and charming, with such fantastic old school rock elements in it that their tracks leave an undeniable impression on you. It’s very blunt and raw music too, with no pretence about it.” (Indie Underground)

A series of fortunate events were the basis for the formation of this five piece. Drawing on influences ranging from Matt Corby to Grizzly Bear, their eclectic pop numbers are not to be missed!

Have a listen at //soundcloud.com/wearetalltrees

Plus a club night after the live music till 3am – more details coming soon!