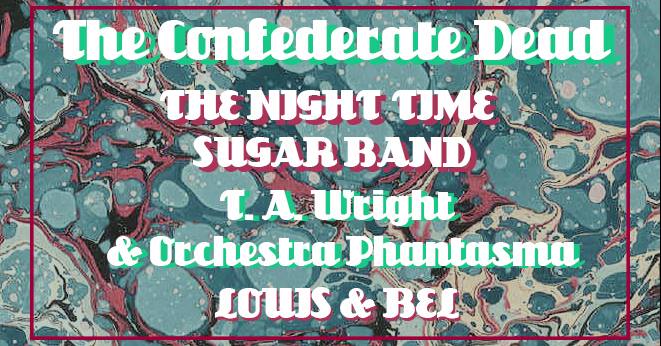 Join us on Friday 10th May for a kaleidoscopic run through of 60s psych grooves and sounds from The Confederate Dead through to the vintage soul & blues of The Night Time Sugar Band and prog folk dons T.A. Wright & Orchestra Phantasma with an opening set from Louis & Bel and a club night running till 2.30am!

THE CONFEDERATE DEAD
Reverb drenched songs of colour and death are at the heartbeat of The Confederate Dead’s music. The London 5 piece have released 6 albums, with influences raging from 60’s psychedelic through to Islamic prayer and neo/psyche drone, you hear blends of Galaxie 500, The Doors, Joy Division and The Brian Jonestown Massacre.
https://theconfederatedead.bandcamp.com
The Confederate Dead

LOUIS & BEL
Singer-songwriter duo who formed in Oxford and now based in London. Playing a special set of sultry 1960s covers and self-penned originals